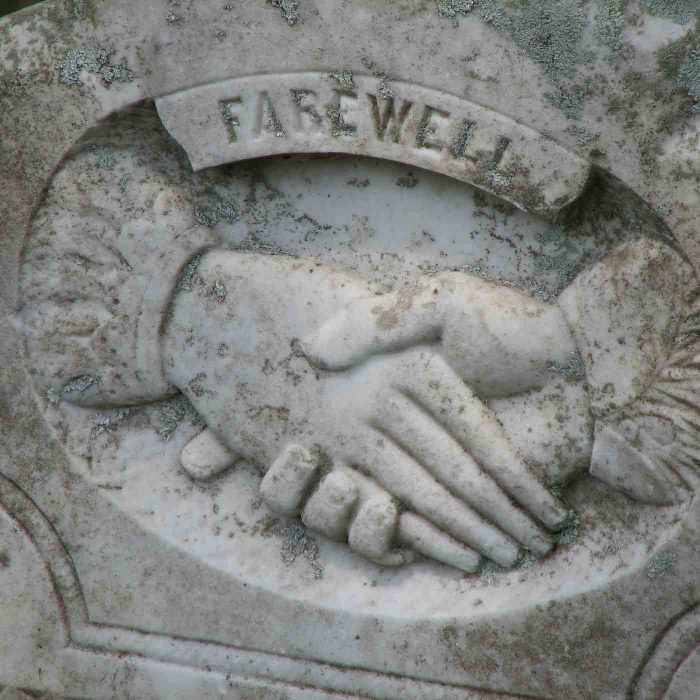 Caretaker Thompson pensively chewed the taste-spent lump of spearmint gum in the gap between the molars where he’d lost a tooth to a slip of a faulty mechanical shovel back in the ’50s. Raking the autumn oak leaves from where they rested on another row of old, but well-kept graves, he took the time, as he often did around the early part of every evening, to reflect. It had been a long life, but not a bad one. Starting out as a pre-teen gravedigger and working his way up to caretaker when the locals stopped burying their dead loved ones here, Caretaker Thompson was as much a fixture at Hope Valley Gardens as any of its residents and their endless rows of monuments that ranged from tasteful to garish.

Caretaker Thompson could tell you the names, dates, and epitaphs of all 8,247 people buried in his quiet little cemetery. He’d been working there since he was 12 — when there were still occasional burials — but now that seemed lifetimes away. While Hope Valley Gardens had changed from private to church to city to county to state and back to private hands since its first resting place had been dug back in 1838 (row 1, plot 1, Caretaker Thompson would tell you), this work had been in the Thompson blood since his father’s father had taken it up upon returning, shell-shocked, from one of the wars and finding it to be the most soothing of a long line of careers. From there, it just seemed natural that his father would take up the shovel, and that he’d soon follow. The tradition would end with this Caretaker Thompson, though, as his lifetime of bachelorhood had produced no offspring. When his time came, he’d probably be the last person buried here in a plot that had belonged to his family since before he was born. It had been paid for when his father was in kindergarten.

There was one unquiet spirit who visited Caretaker Thompson on a nightly basis. She insisted that hers was just one of a number of unmarked and long-forgotten graves scattered here and there before Hope Valley Gardens was officially a sanctified graveyard — back when pioneers were just passing through to places more westward (which seemed to be the direction in vogue in those days). Covered wagons would often make a stop here before traversing the mountains, and this is where the living would say farewell to the ones who had fallen ill or been mortally wounded by hungry wildlife, clumsy misadventures, or provoked natives over the past week. The graves of these left-behinds weren’t usually intended to be permanent, so they were often hastily marked with wooden crosses cut from local timber. While most of the corpses were fetched and brought to re-interment where a family had settled just a few months or years later, circumstances — whether financial or familial — often didn’t allow for such reunions. As years went on and memories of past generations faded, the crude wooden markers would rot to weather, termites, and time. So, too, would the anxious spirits of those whose westward paths were forever halted in this lonely old bone yard.

“Nice weather we’re having here in the land of the living, hmmm?” murmured the ghost of the human being formerly known as Luanne Ellis. “Hello. I’m Luanne. Luanne Ellis.”

Ah, Luanne Ellis. There was no grave with such a name, but yes, the name was familiar to Caretaker Thompson.

“Mmm hmm,” Caretaker Thompson looked up and offered a faint smile, then continued his raking.

“I’m a ghost! My old bones are buried deep beneath the roots of that towering oak! I have no stone of my own!”

“Oh? But I can see you just fine. Are you sure you’re not just lost? Do you want me to phone someone?”

“Pho… what? I’m…” There was a pause, as if the ghost of Luanne Ellis was considering a different approach. “Booo! Booooo!” resumed the voice, shaky with uncertainty.

“Lady, knock it off with the nonsense! Are you trying to scare me?”

“Of course we do our best to try and give you a scare! It’s the only way any of you will ever pay attention to us!” said the ghost of Luanne Ellis.

“Ah,” said Caretaker Thompson, “but I don’t believe in ghosts.”

“Well, nuts,” said the apparition, disintegrating into a lazy mist and then soon, nothing at all.

“You really should be nicer to her. She doesn’t get your sense of humor,” said another voice that seemed to come from a place that was simultaneously inside of Caretaker Thompson’s head and yet an uncountable number of miles away.

“Devin Morrison. 1834-1901. Devoted Husband, Beloved Father. Row 124, plot 14. I don’t mean to be unkind to the young lady, but she’s just going to forget it all and bring the same conversation to the table tomorrow night.” Caretaker Thompson sighed, “I’m just trying to jar her into something else to talk about.”

“What have we learned, Caretaker… Thompson, yes? You look different every time I see you.” said the voice of Devin Morrison.

“I am Caretaker Thompson, but you might be thinking of my dad. Or maybe my grandpa. Or maybe both?”

“What have we learned?”

Caretaker Thompson cleared his throat and said, as he’d said hundreds — maybe thousands — of times before, “Old ghosts aren’t always old souls. If one must play with them, play nice.”

With the animated dust of past decades parading through this tired old place to keep him company, it sure made the remembering easier.