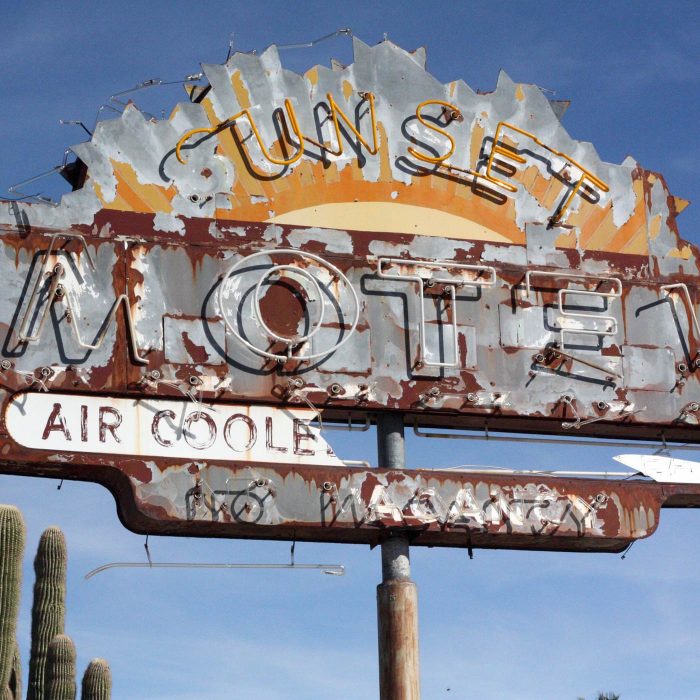 Sure, the off-white sheets had been changed recently, but the nauseating aroma of old leftovers wafted from the mini-fridge like a fog of decay. An antediluvian slab of fungus-encrusted pot roast peered over the lip of a lidless Tupperware bowl, and a thick carpet of mold clung to every surface inside of the unplugged refrigerator. Where a better class of accommodation might lure its guests into parting with expense account cash on tiny bottles of liquor, chips, and candies, this was the kind of place that tempted its visitors with promises of no questions being asked and a slim chance that the beds wouldn’t infect them with some variety of unsavory parasite or disease.

Cal slammed the fridge door shut and sighed. Cradling a half-empty bottle of store-brand malt liquor stamped with generic labeling indicative of months spent in a trans-Pacific cargo hold, he looked to the ceiling as if hoping a sign from heaven might make itself apparent. He immediately wished he hadn’t let his gaze linger upward, as the spotty brown bloodstains from some past crime or another that he saw there were only slightly less alarming than the cobwebs and carcasses of long-dead, long-legged critters that vaguely covered them. Through the thin wall stained with nicotine, vomit, and other undesirable substances, creaking furniture from the neighboring room and the sounds of either human ecstasy or agony drowned out the voice of the newscaster on Cal’s static-strewn black and white television, even though the volume was turned to maximum. At least it also drowned out the bathroom faucet’s incessant dripping of a thick, rusty brown fluid approximating the unhealthy hue between root beer and diarrhea. At this point in his life, Cal had to count whatever small blessings were thrust his way by the universe.

The motel wasn’t highbrow enough to be considered fleabag; even the most infinitesimal of bloodsuckers were more discerning with their taste in lowlifes than the clientele of this shit stain in the middle of hillbilly Timbuktu. And as much as it disgusted him, it was the perfect place for Cal to lie low before the heat died down. With two gym bags full of freshly laundered cash, he should be living large on the beach of some warm seaside village with a name he couldn’t pronounce among people who spoke a language he could pay enough to never be bothered to learn. Unfortunately, a few weak links in the chain between him and a clean getaway threatened to screw it all up, and Cal would be damned to every level of Hell in tiny pieces before he’d ever go back to prison. One of those weak links was supposedly meeting him at the airport 70 miles away. Cal wouldn’t be there, but a few tipped off undercover agents would be. There had been three gym bags of cash, but one was sacrificed to the agents to ensure that this weak link was taken out of the picture before he could give away any more of Cal’s plans to the wrong interests. If everything went smoothly, his blessedly corrupt angels of salvation would give him the signal, and he could proceed with his early retirement only slightly behind schedule.

For now, among the rancid stench of rotten food, the bedbugs, the generic malt liquor, the bloodstains, the spiders, the people fucking (or, he hoped, dying) next door, the bad television reception, and the broken bathroom faucet, Cal consoled himself with one simple thought: no matter how bad you’ve got it, it can always be worse.

Unless, of course, you’re one of the weak links.

Happy rest of the old year!