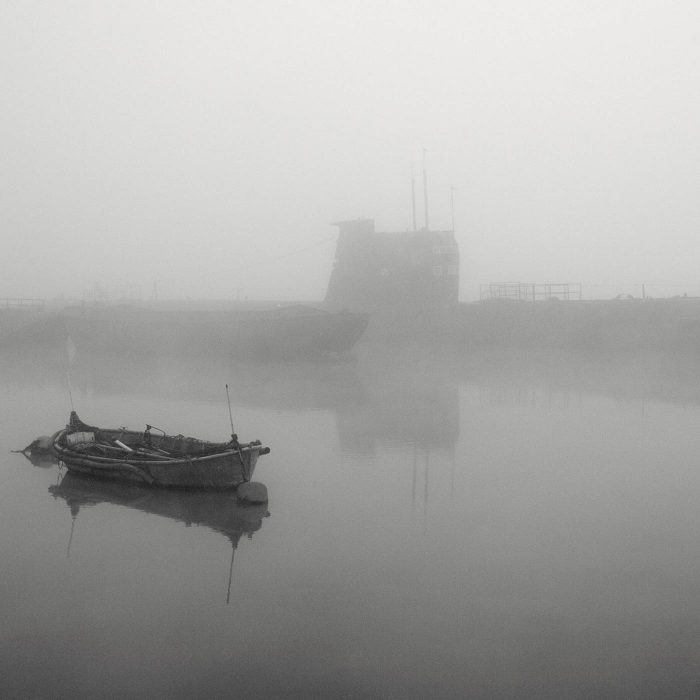 Pompous ligaments fine tuned by the bereaved kept themselves limber by yoga on the graves of the ancestors who had no need of them any longer; the stretchers could share from the great beyond. Nothing gone to waste, see? So the yolk stays in the egg even if it’s scrambled up and served to people who have no need for breakfast or shells or shoes. The mountains don’t keep climbing until the weather beats them flat again. We’re washing up on the shores with bleached bones, beached for all to see. We’re skeletons exposed to the elements until we return to the elements again. A little fire in the spirit goes first, cast out on a final breath of air, and then the water dries up, and the earth takes what remains in its own sweet time. Nothing gone to waste, see?

So as I was ballet dancing on the capstone that set everything in motion, I saw a peculiar thing on the horizon with my binoculars (implanted before the accident). In the sky, there was a battleship shaped like a dinner plate made of steel (like the kinds we had in county lockup before ubiquitous plastic was invented and infused into every aspect of our society from the higher ups to the dregs below). I know it was a battleship because it was fighting with another of its kind, which was a little farther in the distance. Sparks blazed between the two in immense columns of fire and smoke. I was too far away to hear any noises that may have been made, but I could feel vibrations from when a piece of one of the battleships would fall to the ground, which led me to believe that these mammoth aircraft were each bigger than cities. I never told anyone about this, but I can’t imagine I was the only witness to the event. Still everyone else must have kept mum for the same reasons I did (which may not need to be explained to anyone who’s ever been doubted. All children know what it’s like to be accused of some minor crime they did not commit).

As I was dismantling my structure by dancing more slowly against this backdrop of faraway carnage between two behemoths, I stretched my neck too far and found pelicans bouncing off of my gigantic hairdo! Is this something I can expect to happen on a regular basis? Who can say? All I know is that I was more able to disclose the clumsiness of my latter situation than the former. Could I be forgiven for failing to comply with my own standards among the rest of them? Perfection is a disease in itself — not the absence of imperfection. I’ll dive below the oceans deep to come up with pearls when my lungs grow big enough or gills can take their place. I will breathe salt water as well as fresh, and I’ll reveal all wrecks below as they strive to surface. Drowned deckhands and capsized captains will cheer me from their watery tombs. Underwater EVPs will be awash with the strangled cries of the avenged greeting me as their liberator, and I will get rich on the overwhelming evidence of the sea’s indifference to human suffering. Who’s ever given up in the face of cruelty? Maybe all of us from time to time.

We convene on ley lines made of tears and sweat and hope and pride — all sins to someone, and virtues to another (sometimes within the same). We hog the jukebox when it’s our turn and hang out to hear our selections and the reactions of those who surround us while awaiting their own vindication. You can never run out of money when it’s still being made. A good place to get more is outside the bar when you’re telling stories about spaceships and ballet dancing, which only happens when you’re drunk and you’re surrounded by drunks. No one remembers why they gave you the contents of their wallet, and you don’t remember how you managed to secure the funds for another round, but you know the next morning that all missions for which each party set out were accomplished with abnormal amounts of compliance from all forces that be: including you and including them.

A chipper dose of reality will blindside even the most bashful of ghosts into giving themselves up to the curious. But when the voices echo in your head and you can’t identify their origins, just remember that the ghosts might, at the end of the day, be you.

[Photo above by Keith Marshall]

Happy rest of the old year!