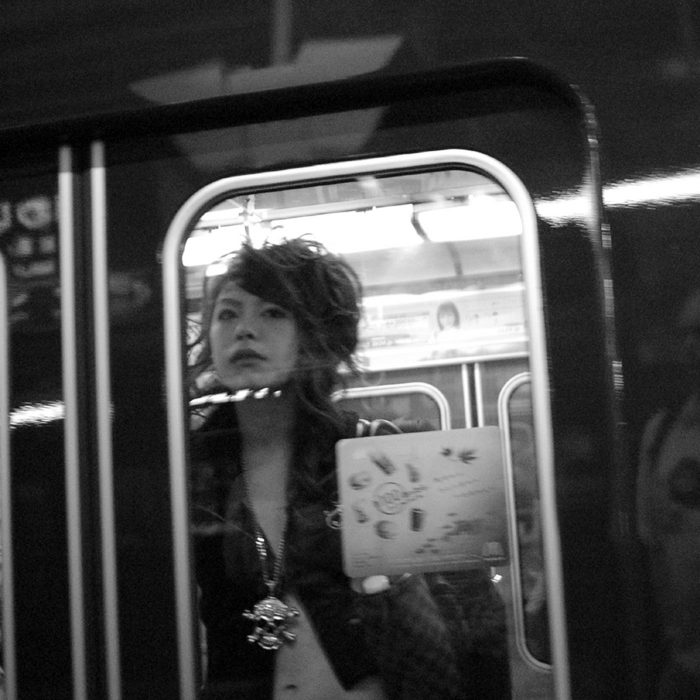 The telemarketer’s headache radiated pain beyond her skull’s confinement and filled the summer-steamy subway car with waves of despair that crashed in all directions outward. She extended the psychic opposite of a hug to anyone who, unwelcome, met her gaze. It had been like this on the 5 am commute into the city, throughout a double shift of listening to jugheads and jackasses voice their displeasure at her interrupting their breakfasts, lunches, and dinners (they never seemed to stop feeding), and now, as she rode the rails 30 feet below the streets of a city with a sky the color of quiet, smoldering anger. Tornadoes were likely to strike before the evening news could dispatch an appropriate narration for the upcoming tragedy, though earthquakes were the disaster of choice for which tired citizens here prepared as an afterthought. Silly fuckers, she thought. All of us.

Though no trains went where she was going, she figured she could at least take this one to the end of the line and see how far past that the splotchy-inked transfer wadded up in her tiny fist would take her. It was a bit like an adventure — the sort of thing she’d read about and heard other people discussing in the office break room between shifts. For a change, she’d be the one with a story to tell if they all could make it to tomorrow without tornadoes, earthquakes, or other expressions of an imaginary, divine parent’s displeasure ruining an otherwise lackluster day. The tunnels were braced for almost the worst of it, so perhaps mortality was less imminent than she reckoned.

A subway train assuredly could outrun the wrath of a sleepy pantheon deprived of mortgage payments and meal tickets since the masses stopped tithing. But still she worried. It was easy to worry when a headache like this was an anvil being pounded upon inside her brain — a forge for weaponry against the world. What good’s a sword against determined clouds or mountains, though? None at all. But power against her fellow proletariats was possible. The misery that loves company was the throbbing pulse that fueled the endless pain inside of her pretty (but pitiless) head.

Could she go through with it?

It was certainly easy enough to get off at her usual stop and trudge the gloomy steps back to the unkempt studio apartment that she shared with only the memory of her last boyfriend — who had left her for college (and co-eds) in another country. She could draw the dust-encrusted curtains to shield her view of the impromptu neighborhood dump that had built up beneath her window, watching bad television and drinking enough cheap liquor to pass her into numb oblivion until still-dark morning greeted her with the alarm clock’s prompt to get back to work.

Maybe adventure could wait for the weekend. Or the weekend next. For now, another dreamless night of slumber might dole out just enough caustic comfort to make it to the next dull day. She crumpled up the transfer and threw it thoughtlessly on the dirty subway car’s already formidable pile of casual, end of the day clutter. No deities were invoked to plot this latest defeat, she mumbled to herself in consolation. In this, her apathy was transformed into — an albeit lazy sort of — empowerment. In spite of this, she prayed for tornadoes and earthquakes to bring the adventure to her. She was just too tired to make the commute.

2 comments on “This Is Not a Hug Song”